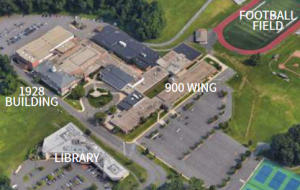 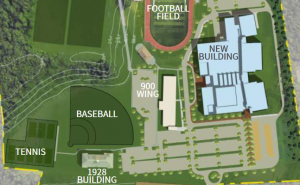 The 900 Wing renovation is the most cost-effective solution to address several needs:

Currently, Central Office and Special Services are located at Town Hall. However, Town Hall is home to many Town departments, and some must be located in satellite offices because they cannot be accommodated in the current space at Town Hall. The Regional Probate Court is also located at Town Hall, which has its own significant space needs. The resulting overcrowding has also contributed to a lack of storage space as well as meeting/conference room space.

The pandemic brought to light other issues within the Central Office due to a lack of social distancing through overcrowding within the limited office space.  Central Office will need to relocate no matter what due to overcrowding between the school district departments and the Town of Farmington departments, which will require funding.  The use of the 900 Wing is the most cost-effective approach to fully maximize space and will avoid a costly purchase or costly lease options of office space for Central Office within Farmington.

Thank you for signing up for our updates!

Please note - for security, you will now receive a confirmation email. You must click the link to confirm your subscription and begin receiving our updates.
Thanks for subscribing! Please check your email and be sure ti